Harold and Maude. I’d been contemplating seeing this film for at least a year before actually watching it. All I heard was that it was “really good” or “worth watching,” which I’m sure is understandably vague. For that reason, I had no idea how amazing it actually was! Ok,  Harold and Maude  tells the story of a death-obsessed, twenty-ish fellow that lives with his wealthy mother. He spends a lot of time faking his own demise, until he  meets the coolest, most adventurous 79 year old woman you’ll ever lay your eyes on, Maude.

They develop a friendship that becomes a romance and while you may think this is odd from the outside looking in, I don’t think you’ll feel that way after watching this. I only say that because I found nothing strange or odd about their relationship. I found myself rooting for them. Really! The real reason I love this film? 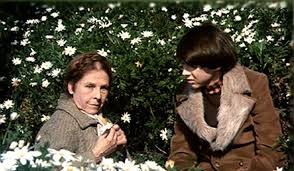 I wanna be like Maude when I grow up! Maude steals cars on a whim, dresses like a bohemian gypsy, totally borderline-horder status without seeming crazy, and truly practiced carpe diem. Maude represents the most natural and graceful form of beauty because she embraced  all that she wasl; No apologies! She wore little to no makeup and grinned her wrinkled smile with pride. Age meant nothing to Maude and I think that’s why their relationship seemed so … acceptable? Contrasting Maude to normal representations of beauty makes her even more unique. Youth seems to exemplify some sort of advantage when it comes to beauty.

On one hand, this is understandable seeing that old age inevitably means less time to live, and most of us aren’t obsessed with the subject of death like Harold. Maude embraced her old age as an advantage rather than disadvantage. She appreciated her life experiences and took each day for what it was. She was thankful for her years rather than regretful of her past. Old age is often taboo, but with this story, it’s accepted. Maude shows us that aging gracefully, naturally and happily is beautiful. And I so admire that.